The Puglia Region, a region recognized throughout the world

National Geographic, Lonely Planet and the New York Times are confirmed that Puglia is the most beautiful region in the world

Every year, newspapers and magazines from all over the world try to compile a list of places to visit, advising their readers what to do for the holidays. The Puglia Region in recent years has been much cited by the global editorial giants, ( Read the National Geographic article from last year ) and this year it received another recognition from Lonely Planet and New York Times .

In addition to the crowded hot areas of Puglia, there are nature reserves, caves, medieval quarters and several hundred miles of coastline to enjoy, not to mention the main attractions of the region: fantastic food. Puglia is a profusion of medieval towns atop a hill, olive groves, a coastline dotted with interesting cities, olive groves, restaurant menus full of local specialties, two national parks, vineyards, even more olive groves and enough castles, cathedrals and palaces for entertain even the most demanding history buff. Oh, and the largest European colony of pink flamingos.

The highlands are located in the Gargano promontory to the north-east and in the Alta Murgia national park to the west, while the rest of the region is flatter, often pockmarked by small hills topped by a settlement of some kind. There are several hundred miles of Adriatic coast to the east, a part of the Ionian Sea to the south, and a pair of large lakes rich in wildlife in the north (Varanus and Hvar), which are separated from the sea by low hills and sand dunes .

Since Puglia is basically the form of an inverted hockey stick, finding a way to see all this is an uncomplicated affair. Embrace the coast from Vieste in the north-east to Brindisi in the south, before entering the hinterland to take the white city. Then head west to Alta Murgia, north to the mysterious hill of Castel del Monte to admire one of its wonderful sunsets, to the west towards Foggia and then back to the Gargano to complete the circuit.

Would you like more information on the Puglia Region?
Read our guide on Puglia and the places to see near Ostuni.

Ostuni, the white city of Puglia

Arriving from the sea, the White City shines white in the sun on the top of a hill towering over an ocean of olive trees dotted with splendid farms. Looking at her I always thought of a huge and delicious cake covered with whipped cream! If you reach Ostuni in the evening, instead, the feeling is to come across a bright spaceship just landed.
And despite knowing him for a long time, the village of the candid city protected by massive circular walls, does not stop enchanting. And the enchantment doubles when you climb up narrow streets and stairways, for courtyards and small open spaces, between arches and cave dwellings on top of each other, baroque balconies and small buildings with rococo portals. 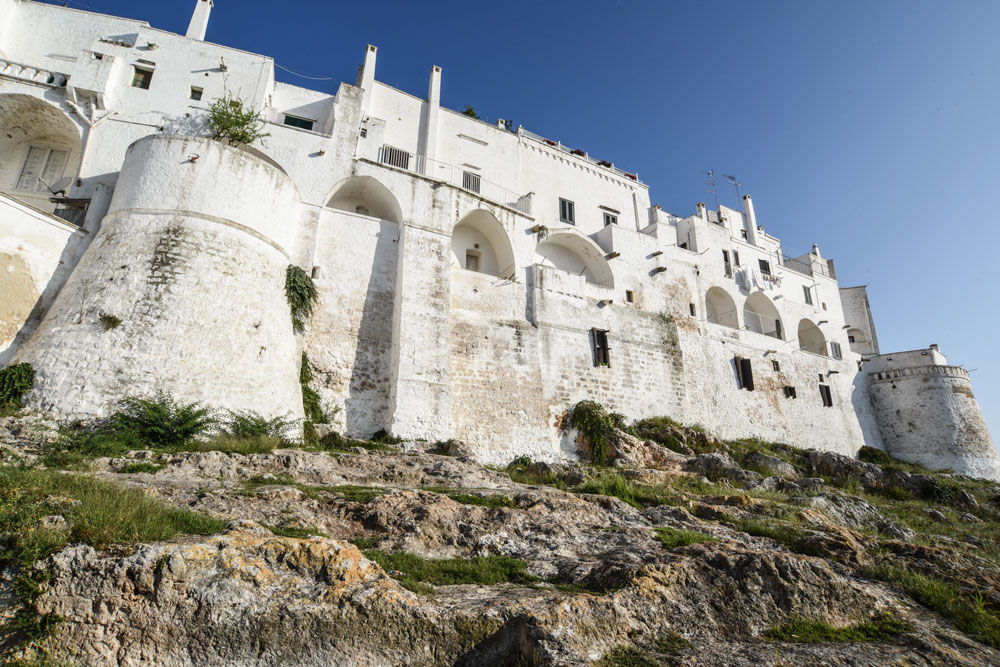 Do you want to discover what to visit in Ostuni?
What to do in Ostuni is never a problem. Its whitewashed houses and hillside location make it an irresistible attraction for visitors to Puglia and there is much to see and do if you are planning a trip to Ostuni.

If you plan to visit Ostuni , Palazzo Rodio with its holiday apartments located in the historic center of the city is pleased to welcome you.